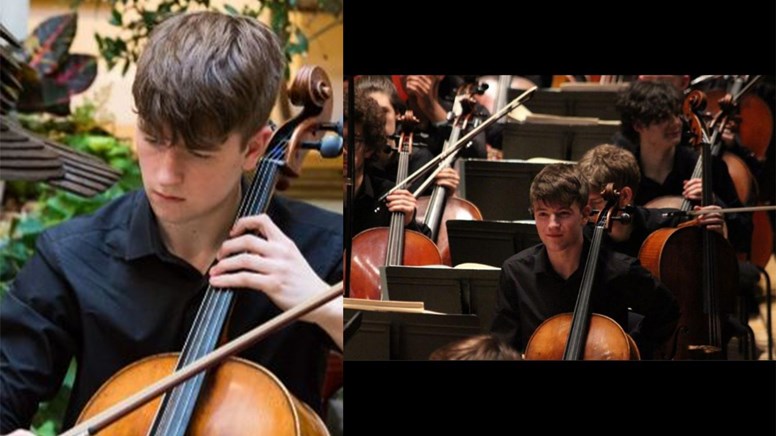 Principal Cellist of the NYO, Dan, borrows an English cello from the Loan Scheme and  recently sent us this update as he embarked on the next stage of his musical journey. His achievements and success are awe inspiring.

I have so enjoyed playing my current cello and I still feel so incredibly lucky to have it on loan from Benslow. People have often commented on what a lovely cello it is and what a beautiful sound it makes!

This last year under my fantastic teacher Michal Kaznowski, it has taken me through concerto performances( Dvorak and Saint-Saens, both with orchestras), through competitions at the Royal College of Music Junior Department, (Mary Edwards Prize, Fredda Dinn and Ida Mabbett for Runner-Up in the Peter Morrison Concerto Competition and Angela Bull Competition). It also took me to the Purcell Room together with my string quartet as winners of the RCMJD Chamber Music Competition, as well as a number of recitals, most recently in the Elgar Room at the Royal Albert Hall, in Shrewsbury and in Poole. Finally, I played it in an international masterclass with Alexander Baillie, Colin Carr and Leonid Gorokov.

The most amazing experience of this year of this year has been being awarded Principal Cello of the National Youth Orchestra of Great Britain, where again, my cello was wonderful to play both in tutti and in solos, including a televised solo in The BBC Proms.

I am now going over to Hannover to study at the Hochschule with Professor Leonid Gorokov and I already have a recital in London and two concerti (the Dvorak with the Aylesbury Symphony Orchestra and the Elgar with the Essex Symphony Orchestra0 to look forwards to in 2020.

I am very much aware that it is a great privilege to be entrusted with a great instrument and I very much appreciate the opportunity I am being given.

I cannot think of a better ambassador for the Benslow Loan Scheme than Dan would be. Principal cello of NYO, principal cello of the Royal College of Music Junior Dept Orchestra, principal cello of Stoneleigh, awarded scholarships to all the main London Colleges and prestigiously winning a place in Hannover Hochschule in the class if Gorokov.

Congratulations Dan - we are thrilled to hear all this wonderful news and and extremely proud to know that the Loan Scheme is helping such a deserving and talented young musician.