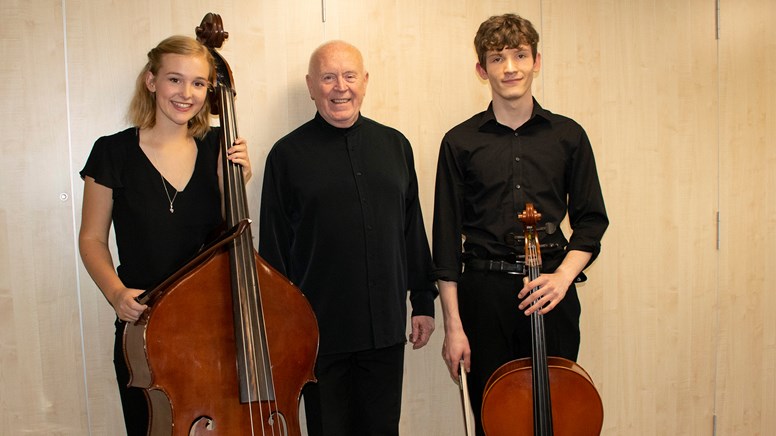 The 2019 Benslow/HCYO award was given jointly to two young musicians this year - Minnie Elliott, Double bassist, who is borrowing an English double bass owned by the Loan Scheme and George Smith, who chose a French Mirecourt cello made by Buthod which is generously lent to the Scheme by Miss E Cobb.

Violinist Isaac Barkway is the 2016 recipient of the Benslow/HCYO Award. Isaac is studying at Cambridge University.

Millie Newis, violinist, has just taken up her place at Magdelene College, Cambridge studyiong English Literature. She continues to play with HCYO, Watford Youth Orchestra and also in String Ensembles in Cambridge.

The 2014 winner of the Benslow/Herts County Youth Orchestra Award was Andy Huang. Andy went on to study maths at Warwick University, where he led the University Symphony Orchestra. He continues to play with HCYO. 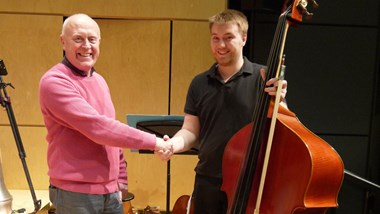 The 2013 award was made to Max Lawrie, aged 17, Double Bass. Max was presented with his award by Peter Stark at the Herts County Youth Orchestra Spring Concert. Max borrowed a contemporary double bass made by Martin Penning of Frome, Somerset and plays regulary with the St Albans Philomusica and the Amadeus Chamber Orchestra. In addition to winning a scholarship into the deHavilland Philharmonic through the Hatfield District Music Festival, Max also won a place to read Music at Magdalen College, Oxford in 2014 where he is an academical clerk in the choir.

The winner of the award for 2012 was violinist Yannick Mayaud, aged 17, from Beaumont School in St Albans. Yannick was presented with his award at the Benslow 80th Anniversary Concert at the Royal Academy of Music on Saturday 14th April 2012.

In 2014 Yannick began his degree in music at Pembroke College, Cambridge. 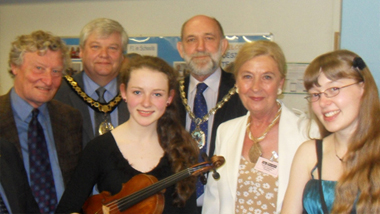 The 2011 Award was presented to violinist Mary Gough.

In 2010 Rebecca Lewis was given the Benslow Award and the opportunity of borrowing a violin. She went on to study English at Cambridge.

Violinist Tom Marlowe was the 2009 recipient of the Benslow Award. Tom went on to study music at York University.

In 2008, the first recipient of the Benslow/Hertfordshire County Youth Orchestra Award was violinist Sally Potterton. Sally is now a freelance violinist, having studied Music at Oxford. In recognition of the help Benslow gave, Sally has now lent a violin to the Scheme in return. She continues to perform and to live in Hertfordshire.

Herts Music Service
Hertfordshire Music Service is dedicated to giving children throughout the county the opportunity to play music. It is one of the largest organisations of its kind in the UK.