Recent News Updates from our Borrowers

Recent News Updates and images from our Borrowers 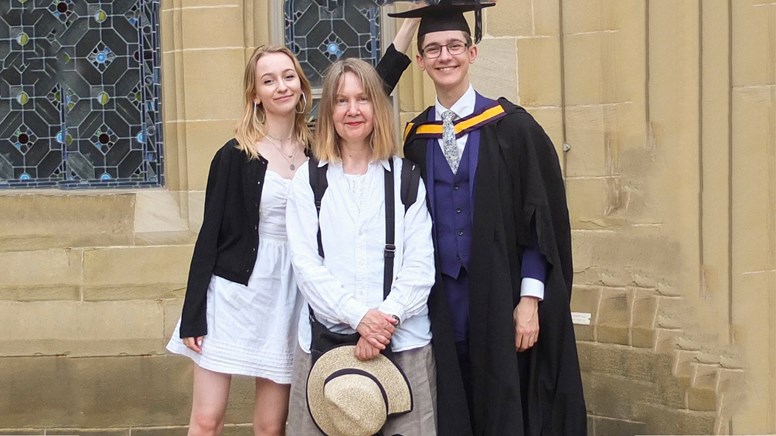 Congratulations to our talented borrower Dominic Skingle at Manchester University who has just graduated with a First in Music. Dominic achieved the second highest mark in the Department and was given two awards including the Dean's Award for Excellence. A stunning achievement and reward for such hard work and dedication. The Loan Scheme is delighted - next stop a Master's!

Emailing to tell us this great news Dominic's mother wrote

"The Benslow Instrument Loan Scheme has been a fantastic resource and we are so very grateful to you for the support throughout these years. Dominic graduated with a First and received two awards, one the Dean's Award for Excellence as he achieved the second highest mark in Music. I went to his final recital and it was so wonderful to hear him play to such a standard. I am so proud."

And the Loan Scheme is very proud too. Well done Dominic - your smile says it all.

Lovely news from violinist Teyha Dawson's mum Suzanne - since performing for us at the 2017 Benslow Music Open Day Teyha has had a very busy year with her new teacher Professor Faith Whitely at Junior Guildhall.

Suzanne tells us that Teyha has been moved up to the flagship Guildhall Orchestra and to the Chamber Groups a year early, as well as playing with the Symphony Orchestra.

At Easter Teyha completed the New Virtuosi Course and over the summer has been on the national Chamber Music Course for which she was awarded a full scholarship. She has been asked to do several solo recitals this Autumn outside of her performing at school and at Guildhall, and she is now working hard towards this.