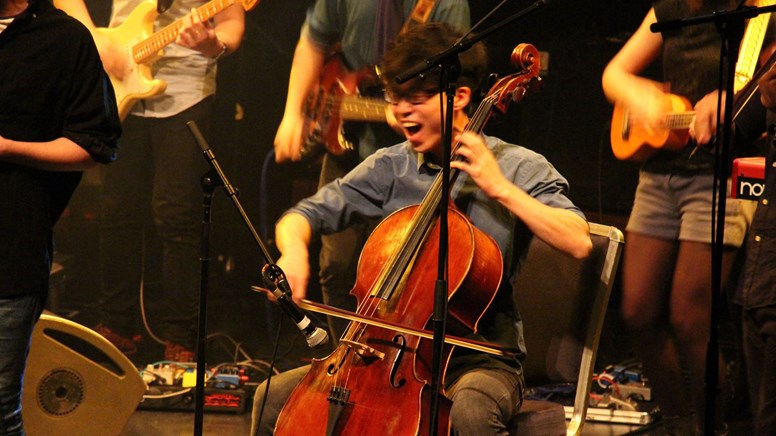 Borrower and newly qualified Dr Jinseog Lee recently came to return the Benslow cello he has borrowed from us for 8 years. It has seen him through A levels and 6 years of study in medicine at London University.

We asked him about how borrowing a cello from us had made a difference to his life before and at University.

The Loan Scheme is very proud to have lent this cello to him and that it has enriched his life so much - well done Jin - we are thrilled at your success. Read Jin's answers here -

1. What difference to your life has borrowing a cello from Benslow made?

- What's quite funny is my parents first got me playing the cello partly because I was quite a temperamental child and they thought it would calm me down! I don't know what they were thinking because the first few years were absolute carnage and it sounded horrible despite all the practice going into it, but I do think that without the cello it would have been harder to learn that there are different ways to deal with your mood than just being upset. We didn't have any cellists in the family and like most large households we didn't have a spare £5k knocking around for me to get a new cello every time I got bigger so without Benslow I basically wouldn't have known the cello. That translates to nearly twenty years of lost experiences, relationships with people and emotional growth. These beautiful instruments cost more than a car by a fair margin so it's absolutely stunning that an organisation like Benslow exists to allow children like me to know a life with the cello. It's been a deeply worthwhile journey and I've had so many friends who've said that they wish they could play one. They don't know the half of it, but thanks to Benslow, I do.

2. How has music helped you through your time at university?

- University can be a really tiring time and a lot of people just come home and crash every evening especially when work gets busy. It's a bit counter-intuitive because music takes a bit of effort, but I actually found that I had more energy (and higher moods) during the week if I managed to fit in some instrument-playing or singing. If you don't do something other than work, you're basically a studying/assignment-writing machine, which makes for a bit of a dead experience and I think that translates into how you feel physically. Even better is doing something you really enjoy, better still is doing something you really enjoy that you're also good at (sorry)!

3. How does playing the cello help you mentally and physically?

- What I love about the cello is that it's a really physical and intimate instrument, which means playing it makes for a fulsome bodily experience on top of the emotional and intellectual side of music. It's a bit like the feeling of euphoria after a good work out combined with the satisfaction of solving an intricate puzzle and the joy of exploring the different parts of your persona and feelings in a healthy way (i.e. art). You can't be coy about your movements if you want it to sound right and sometimes you need to be very bold; you get to feel very at home in your own skin if you've been playing the cello for a while. It's a very vivid experience, which makes it a helpful reminder that even though there are stressful and hurtful events at times (which are also vivid experiences), life isn't just those things and neither am I. Also carrying it everywhere will make you extremely fit and I will now probably retire at 80 (the NHS will ask me to anyway).

4. What advice about the value of /using their musical talents would you give to students beginning university who study subjects other than music?

- I think that as you're not studying music, it's going to have to come second to your degree, which means the best advice I could give anyone would be to be organised. Know what getting the grade you want is going to require and know how much reserve you have left over. Having said that I think that if you don't exploit that reserve you've kind of missed half the point of university. It's a weird place where you have hundreds of different activities available all in the same location and perhaps for the first time, you don't have teachers deciding what you should be doing with your music. In the same term you can play in the pit for a musical, get messy in a grimy rock bar, lay down a smooth-as-honey atmosphere in a cafe and produce a single, all within a five minute walk of each other! In my six years at university, this cello has sweet-talked a girlfriend (badly and not even mine), had people yelling tunes (badly but with heart), posed for photoshoots (bad ones, less heart) and made my left shoulder impervious to pain (not actually a good thing). If you like music and you decide that university of all places is the time to stop, you're mad. In a caring way.

5. What are your plans for the future musically and otherwise?

- Well, I'm one instrument down but I still have the piano, guitar and singing (a pipe organ is a bit beyond anyone's budget at the moment). Organising gigs is a bit difficult around hospital shifts so the most I've done recently is play for a wedding or two and even that was before I started work. I've just finished my first two months as a junior doctor and it's only going to get busier so I'm hoping I'll be able to record a few tracks before it gets really insane. But all that doesn't matter - my entire family loves music and our house is littered with instruments so hardly a day goes by when I don't do something musical. Once my mortgage is sorted, I'll start ploughing money into a cello fund and buy that instead of a car, seeing as there's hardly any (read "no") parking around the hospital I'll be working at. Otherwise, there's plenty of other plans - I'm thinking of specialising in emergency medicine because I love the variety and I'm always hoping to spend more time in the bible. My siblings have also been eagerly awaiting the next episode of our dungeons and dragons campaign and I'm spending my sweet time writing it at the moment (honestly, with the right people, it's three hours of improv comedy gold). Not exercising is deadly so I also tend to the health of my elderly future self by dancing whenever I get the chance. Whatever the future holds, I give thanks to God for the great gift of music and the far greater gift of being known by him as his child, both of which I dearly pray become known by more people.

Benslow Borrower Jinseog Lee had been borrowing a cello for over six years when in 2016, as part of his Annual Update to the Charity, he wrote us this lovely letter and sent photos telling us how he was using his Benslow Cello during his studies at UCL where he is reading Medicine.

Having started at UCL to study medicine in 2012, (I am currently in year 4 of 6), I am now at the stage where I can develop the quality of my playing at a reasonable pace, and, being free of the constraints of the school programme allows me to pursue a wider and more adventurous range of musical projects in which to enjoy my cello playing.

Amongst these have been the opportunities to perform as part of the band for musical theatre shows, which was an entirely different dynamic to playing in an orchestra, as now the score lent itself to a more tangible narrative, and I had to keep in mind what the actors were doing, and at what stage in the story the performance was at. Most excitingly, we put on Once, the Musical, last year during term 3, where the actors were also the musicians and played instruments on stage whilst moving, acting and singing. We began with a 30 minute folk-style jam, with the actors swapping in and out of the ensemble, sitting down with a drink to chat to the audience members in character, whilst those playing music produced between us a raw, energetic conversation akin to the jams often heard in the Irish music scene. I thoroughly enjoyed these experiences, as my phrasing would change and adapt to complement the actors’ movements, their lines and their singing.

However, my most fulfilling project was a show called Rhapsody: A Live Music Concert, which I founded and directed, and which is now an annual production put on by UCLU Live Music Society, for which I served as president last year.

It was inspired by a performance of Viva la Vida by Coldplay that I was part of when I was 15; the song had been rearranged by my brother, and all of it was played live by the most advanced musicians that we knew at the time – a full string ensemble, 2 percussionists, a pianist, a keyboardist, and all of us singing. We performed it to a thousand people at out annual Christmas Concert, and it is still one of my favourite memories of perfomring. The entire audience joined in during the bridge, the sound engineering was done so perfectly that each stroke of our bows sent a wall of sound into the crowd, and it was the first time that I couldn’t help myself grinning ear to ear during a performance.

I wanted as many musicians as possible to know what such a euphoric musical experience was like, so I began Rhapsody, which was exactly the same concept, but with a dozen songs instead of just one: 12 numbers, each reinterpreted by highly experienced composers into a new and exciting piece for a large ensemble, intended to give both the audience and the performers a thrilling and exhaustively satisfying experience. It was more successful than I could have imagined, and I had many of the cast and audience coming up to me individually to say how the show had got them back into playing music after a long hiatus, had encouraged them to play more, and had reintroduced them to the love of music and performing – some of them had never enjoyed music to that degree before. I spent almost every day that year carrying the cello with me, playing with them, and demonstrating phrasing and technique, as well as giving them a good amount of energy to play off, to encourage them to embrace their performances and be more expressive.

There is much more that I am doing with the cello that I could write about – I’ve grown up playing it and I think that it would be so strange to ever not play it, that if ever there comes a day where I am without one, a cello would be the first thing that I buy as soon as I save up enough. I can’t tell you what a joy and privilege you’ve granted me with this cello – it has been my friend and companion through many years and many wonderful experiences, and I hope that I am able to keep renting it for many more years to come.

I cannot thank you enough for the times that I have had with it so far.